Snow White and the Seven Dwarfs
Who Framed Roger Rabbit
The Lion King 1 1/2
Mickey's Magical Christmas:Snowed in at the House of Mouse
Mickey's House of Villains

Mickey's Mouse Works
House of Mouse
A Poem Is...
Once Upon a Time
Sofia the First

The Fairest One of All

To marry the Prince

Marries The Prince
Snow White is the titular main protagonist and heroine of Snow White and the Seven Dwarfs, the first film in the animated Disney canon. She is fourteen years old and the youngest Disney Princess. She is voiced by Adriana Caselotti.

Snow White and the Seven Dwarfs

Snow White was a young girl who was the stepdaughter the The Evil Queen. She was so innocent she couldn't see any evil in the world, and because of this she was very naive. Despite this flaw, she was also very beautiful and after her mother died her stepmother took over the kingdom and made Snow White a scullery made and dressed her in rags because she wanted to be more beautiful than Snow White. Snow White still grew more beautiful and at age 14 she met The Prince, who fell in love with her. Snow White, initially frightened, soon returned this. This worried the Queen, as Snow White was becoming so beautiful that others were noticing. The Queen consulted the magic mirror and asked who was the fairest of them all, but rather than say she was like usual, he said Snow White was. Enraged that someone was more beautiful than she was, the Queen ordered the huntsman to kill her and bring her heart back to prove he did the deed. The huntsman took Snow White, who was unaware of what was to happen, out to the forest. As the huntsman approached her, he found that he couldn't do it and confessed to Snow White and told her to run away. Snow White did as she was told and fled into the forest while the huntsman gave the Queen the heart of an animal instead, tricking her.

Snow White ran through the dark forest and had hallucinations of the trees being alive and attacking her. She was terrified at the faces that she imagined on the trees and eventually she collapsed. However, she got up to see a different view of the forest. This time, she was approached by woodland creatures and she befriended them. The animals led her to a cottage in the woods, and she fixed up the dirty cottage and went to sleep in it. While she slept, the owners of the cottage, the Seven Dwarfs, came back after working outside and thought a monster was in the house when they saw that Snow White had fixed it up. Thinking a monster was in the house, the Dwarfs armed themselves but ended up attacking one their allies, Dopey. After the accident, they all crept up to the bedroom and came upon a sleeping Snow White. All of them are infatuated with her except Grumpy, the grumpiest of them all. Snow White awakens and sees them, and immediately is able to guess their names correctly based on their personality. The dwarfs allow her to stay so she can do the housework for them. She has made some soup and orders the dwarfs to wash their hands or else they will not get anything to eat. They reluctantly do so and by the time they finish, Snow White calls them for supper.

They later perform the Silly Song, and they sing and dance and Dopey dances with her by standing on Sneezy's shoulders, though this causes problems because Sneezy sneezes. After this, Snow White sings to the dwarfs, who let her sleep upstairs while they sleep downstairs. In bed, Snow White says her prayers and blesses the dwarfs. Back at the castle, the Queen has been informed that Snow White is still alive and transforms herself into an ugly old hag and sets off to find Snow White with a poisoned apple that will make Snow White fall asleep forever, which can only be broken by true love's first kiss. The Queen assumes the dwarfs will bury her and her true love won't be able to do so. At the cottage, while the dwarfs leave, Snow White bakes a cake for Grumpy, who has warmed up to her, but the disguised Queen comes by and Snow White lets her in. Snow White is tricked into eating the apple and she collapses onto the ground, asleep. The animals inform the dwarfs, who chase after the Queen she falls to her death off a cliff. With Snow White apparently dead, the dwarfs, including Grumpy, all mourn. Unwilling to bury her, they encase her in a coffin. Shortly after, the Prince comes and kisses Snow White, and she awakens. After rejoicing, Snow White and the Prince leave to live in his castle. 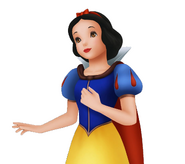