And Then, But Now, Later Forever

There are No Deaths Causes of Him

Randy Orton is the Main Anti Protagonist from the WWE who is an American Professional Wrestler and Actor. He is a 14 Time WWE Champion, 1 Time US Champion, 1 Time Intercontinental Champion, 2 Time Royal Rumble Winner, 1 Time Elimination Chamber Winner and 1 Time Mr. Money in the Bank.

He is a Friendly Arch-Rival of John Cena and is One of the (No Longer) Leader of the Legacy Fractions as the Pawn of Triple H and as All times Rival and Anti Heroic Counterpart of Edge of the Rated RKO.

His Full Name is Randall Keith Orton and was also the Son of the "Cowboy" Bob Orton Jr. He also appeared in Many Films such as -: 12 Rounds, Reloaded, Condemned 2 and Changelands. Randy Orton has appeared in the "Broken Skull Sessions" with Stone Cold Steve Austin.

He was portrayed by Himself, only. 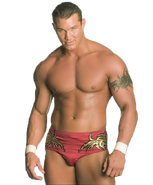 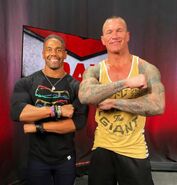