Po is the main protagonist of the Kung Fu Panda series. He is a giant panda who lives with his adopted father Mr. Ping and adored the famous martial arts masters known as the Furious Five and by and accident became the destined Dragon Warrior. He was voiced by Jack Black.

Po was born to two pandas living in a small village inhabited by pandas. He had a happy life with his parents until a sadistic peacock named Lord Shen attacked with his army of wolves, as he had overheard that he would be defeated by an animal of black-and-white. While Po's father fought the wolves, Po's mother carried him away, chased by Shen and several wolves. She managed to lose them long enough to hide Po in a crate of radishes and she had a small moment with him, knowing it would be the last time she would see his son, and then ran off and distracted Shen and the wolves and ran off with them following her so they wouldn't see Po. The young panda was shipped across China and into the Valley of Peace and he was found by Mr. Ping, owner of the noodle shop. Ping initially ignored him, but soon gave him food for him to eat and then adopted him as his own. Po had no memory of his past, and grew up thinking Ping was his father.

Po had grown up into an adventurous dreamer who hoped to become a kung fu legend some day, on par with the Furious Five, whom he idolized. However, he didn't think he could pursue his dream, as he was an out-of-shape panda who worked at a noodle shop, was working at the noodle shop. He adored the Furious Five, five famous kung fu masters that resided in the Jade Palace. Po was giving out food when he got word that the town was coming to see which of the Furious Five would get chosen to be the legendary Dragon Warrior. Po wanted to come, but he was yo take some food to give to the town and couldn't drag it up the hill. Po finally just left the food and went off to the Jade Palace to watch the ceremony. However, he had been locked out, and he failed to get in with other methods, so he decided to attach rockets to a chair and fire himself into the sky to see who would be chosen. He initially gave up upon Mr. Ping's advice, but he was rocketed into the sky before he could stop himself and landed right in the center of the ceremony. When he came to, Oogway was pointing at him. At first Po thought he was pointing to someone else, but it soon turned out that Oogway really was pointing at him and had chosen him to be the Dragon Warrior, much to the shock of him, Shifu, the Furious Five, and Mr. Ping. There was a resulting celebration afterwards.

When Po was introduced into the Jade Palace, Shifu unexpectedly showed up and made it clear that he planned to make Po quit.

Po, Shifu, and the Furious Five

Po in Legend of Awesomeness 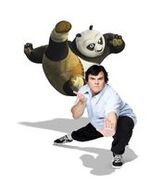