Finn Bálor (Formerly Known as "Prince Devitt" in His NJPW Days) is One of the Primary Protagonist from WWE and a Irish WWE NXT Professional Wrestler whom has a Demon Alter Ego. His normal look is just normal generic ring grear which says Bálor in the Trunks while His demonic look is covered in warpaint and WWE NXT.

He is a Now Friend (briefly an All times Archenemy) of AJ Styles who is a No Longer Client of Jordan Omogbehin and an All times Rival of Grayson Waller. Bálor is also a Mixed Tag Team Partner of Liv Morgan due to Them uniting Forces as Bálor's Styles Livs against the Mysterious Teams, Judgement Days such as Edge, Damian and Rhea.

He was portrayed by Himself, only. 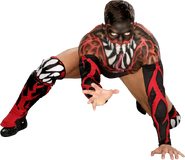